ANCHOR STONES OF NOAHS ARK IS A MISINTERPRETATION

On many websites you can read about the discovery of anchor stones which may be from Noahs Ark.

After personal research of this place and other places in this area I have come to the conclusion that this is a misinterpretation. Please continue reading to see why I came to this conclusion.

On this photo you can see Ron Wyatt (with the white beard), the man who "discovered" the stones. He was the first person hypothesise that these are anchor stones.

This one stone object is huge and many similar stones has been found in this valley which in ancient times was called the "Valley of the Eight".

ARE THERE ANCHOR STONES OF THE ARK?

It is believed that they were used as ballast for the ark and lost at the end ot the journey. The hole was used to put a rope through it to connect the stone to the boat. It is said that all the stones lie on a line which leads directly to the ark.

The Bible itself does not mention anything about such anchor stones.

In  the little village of Sagliksuyu (former Azrab) you can find these stones which are believed to be anchor stones of the ark. You can reach the village only on a sand road. There are about 200 residents in this village which lies in the "Valley of the Eight".

In the background you can see Mount Ararat. 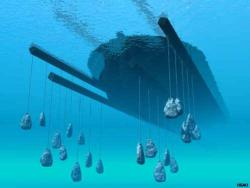 On this drawing you see how the stones could have been fixed under the ark to give the boat better stability in the waves of the flood. It was tried out in a water tank and it confirmed that such ballast was indeed useful to prevent the boat from capsizing in huge mountainous waves.

But just because you have proof that such hanging anchor stones would work and that it is possible to use them, is no proof that in reality Noah actually used them.

Here you can see Henri Nissen next to one of these stones. Henri Nissen is the author of the book Noah's Ark Uncovered, from where this picture comes. In his book he gives us historical information about the search for Noahs ark and explains in detail the different discoveries.

The crosses on the stones remind us about the crosses from the time of the crusades. But this is just an assumption, it is not possible to date these signs.

In a few cases there are eight crosses, one larger than all the others. Some stones are partly broken so that you can't see all the crosses any more.

In the display below you can see pictures of stones which I found in the village. Some have crosses, sometimes more and sometimes less than eight, and some also with this hole.

But it is intirely possible that I haven't found all of them. :)

All in all I took pictures of 25 of these stones. Next to them are a huge pile of stones without such symbols.

Please read now my personal impressions of the site and why I came to the conclusion that these are not anchor stones from the ark.

We spoke with an old man who said he was former vice mayor of the village and he can remember the Armenian church and graveyard which were built previously on this site.

The holes were made for ease of transport because the stones came from a distant quarry.

In the picture you see the vice mayor on the left and on the right my good friend and companion on this journey, Ramazan Celebi.

Ramazan was a great help in organising the whole trip and also acting as my translator.

Without him this journey would not have been possible for me. Many thanks to him at this point!

This picture gives us a total view of the site. Virtually all the stones lie in an area with a diameter of about 70 meters and very close to each other. There are only two stones in a more distance place.

If indeed these stones were cut off from Noahs boat or lost, they would have been landed on soft and muddy soil and sunk into the mud. These would be the conditions we could expect during the flood. But why are they just on the surface and fully visible for thousands of years?

How could Noah practically cut off these stones? He or one of his sons must have left the ark to dive some meters under the boat or he must have built a mechanism to do this job somehow; not to speak about knowing the right time when to cut the stones off (he didn't know when the flood will end until the boat ran aground) without losing stability because the stones were attached for this purpose and it could still have been a long way to go.

And not to forget he would need to be very fast in cutting off these stones as they all lie very close to each other. This would have been impossible to manage. And one question to the end: For what reason should he have cut off the stones anyway? He could have left them in place.

Also, the stones are at least about 200 meters below the possible landing place of the ark. Because the waters were still to subside and if the stones were abruptly torn off because they hit the ground, one questions if this length of rope was possible and whether these drag stones, another name for these stones, would really be useful for stabilisation with ropes as long as 200 meters. And if Noahs boat is to be found on top of Mount Ararat, this is even 3500 meters higher!

People say that the crosses were cut in the stones as a reminder of the eight persons on board the ark. But how did these people, who are unknown, get the idea that these stones were from Noahs Ark as there are no historical records about such anchor stones not even in the Bible.

My personal inspection brings me to the conclusion that this is an Armenian graveyard with gravestones and it has nothing to do with Noahs Ark.

Not far from the village lies this piece of petrified wood which is not an anchor stone but at one time must have been stood upright.

It is believed by some that this is part of the covering of the ark and the one Noah removed as he let out the dove and the raven to fly to see if there was dry land again.

The biblical report tells us a different story, because Noah only removed the covering after the ark rested and not on the way to the mountains of Ararat. As the location of this piece of petrified wood and the possible landing place of the ark are about 30 km apart, it does not fit. 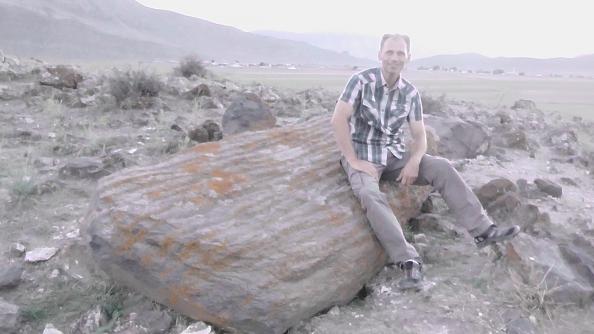 In the background you can see the village of Sagliksuyu.

"And the ark rested in the seventh month, on the seventeenth day of the month, upon the mountains fo Ararat."      Genesis 8:4

"And it came to pass at the end of forty days, that Noah opened the window of the ark which he had made."      Genesis 8:6

The "stone" is very shapeless and there is no support for the hypothesis that this was part of a window or other covering.

My impression is that this is also an old gravestone. 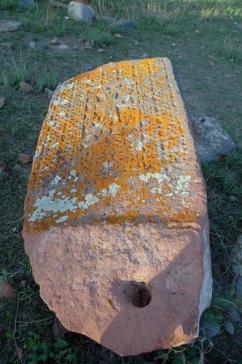 But there are also other discoveries and confirmations which lead me to the conclusion that these are all gravestones:

Acording to a legend there was a monk named Jacob who climbed Mount Ararat in the 4th century to find Noahs ark. He found a piece of wood and assumed that this was from the ark. At the discovery place on the northern part of the mountain he erected a monastery with the name Akori.

Today you can also find an Armenian graveyard at this place. Both the monastery and the nearby village were destroyed by an earthquake in 1840.

Among these gravestones some have holes and all have crosses carved on them, though they are more elaborate than the stones in Sagliksuyu.

These stones are called Khachar, the name given to Armenian Cross-stones. They often have one big cross in the middle and four smaller crosses in each corner. You can find them all over Armenia and even in Jerusalem.

In Lake Van you find a small island, called Akdamar, where an Armenian church was built about 1000 AD. This island is about 300 km west of Mount Ararat.

It is not the church that is interesting here but what is behind the building. There is an old Armenian graveyard and the gravestones are made the same way as the so-called anchor stones in the "Valley of the Eight". The carved crosses are identical with the ones on the stones in Sagliksuyu. Here you also have often one bigger cross surrounded by smaller crosses.

If you look at all the pictures of stones, not knowing where they come from, you would say they are all anchor stones from the "Valley of the Eight".

On the left you see signs written on one of the gravestones in Sagliksuyu.

On the right is an inscription on the island of Akdamar in the Armenian language from 1884 which shows the same type of characters. This is also clear proof that the site at Ararat is a graveyard with Armenian roots.

The hypothesis, that people knew about the origin of the stones as being anchor stones from Noahs ark and therefore put crosses on them, is of no value anymore.

Otherwise this people must have known also about the stones on this island to mark signs on them. The "Anchor stones" must have also landed on this tiny little island, 300 km away from the other stones. Even more, this island most likely would not have been in existence at the end of the flood and at the time when Noah floated over. What a coincidence there is an island there today!

And why were only a few stones "unloaded" and the rest unloaded at Mount Ararat? 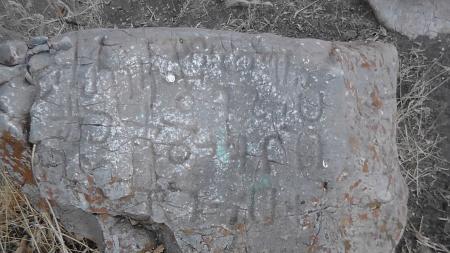 Here are similar characters on one of the stones at the Armenian church.

Sadly I have no translation of the inscription on these stones. If someone can help me with this, it would be much appreciated.

There is a place in Armenia, called Karahunj-Zorats Karen, where you can find 223 stones with nearly the same shape as the ones in Turkey. They are without crosses but 80 of them also have a hole, similar to the holes in the stones in the village Sagliksuyu.

The reason why these stones were erected is unknown. Speculations range from a pagan cult to the idea that the holes in the stones were maybe drilled for astronomical observations.

It could well be that because there are also stones with holes but without crosses in Sagliksuyu, that in the first place they were used for the same unknown reason like the stones in Karahunj-Zorats Karen, and only in later times became gravestones. 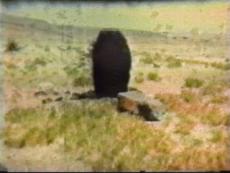 Another possible discovery could be this gravestone with a drawing of eight persons on it. It could be that one of the four women from the Ark was buried here. It was found next to the "Anchor stones" in the Valley of the Eight.

Sadly the grave was looted and the gravestone removed after it was made public. The extent of the pit where the coffin had been suggests that the person buried at this site must have been about 3 m tall.

This is the only picture taken of the grave in its original condition. It was also taken by Ron Wyatt. But because of lack of physical proof it is not possible to confirm the above information.